Galleria d’arte La Fonderia presents More than human, a group exhibition that opens on Saturday 26th November at 6 PM in the headquarters of the Florentine gallery in Via della Fonderia 42R.

With this exhibition we intend to underline how the research carried out by the Gallery, through the exhibitions and the artists involved, can actually be linked to this question: what value do we give to our form of existence when we try to understand the dimensions of the internal and outsiders’ worlds that surround us? Each of us searches for his own essence of identity in himself and in the contexts we live every day. We are thinking beings who cannot stop at the appearance of things alone: ​​the investigation that we must conduct individually will bring more questions and doubts, but it is precisely by entering into each of them that we’ll be able to bring out our individuality as human beings.

Through Leopoldo Innocenti, Claudio Cionini, Skim, and James Vega we’ll be able to linger on what is the relationship between the individual and his

interaction with the outside world.

Leopoldo Innocenti, with an alchemical approach and a painting close to Central-European expressionism, studies the interactions between colors and interpersonal relationships, the instinctivity and interiority of man, with his most intimate and tormented sides. Stratifications of images, extrapolated from one’s own experience or from the most hidden corners of the psyche, come to life in the natural world. Claudio Cionini, on the other hand, with his metropolises underlines how the human dimension has become our new natural habitat: the apparent absence of the human being, which is nonetheless perceived, in frenetic cities which actually develop precisely according to his constant presence. Skim‘s works transport us into a reality made up of captivating and lively colors that enclose an urban world made up of ties and communication, where external interactions experienced on city walls find their new existence on canvases in which to get lost in search of details and hidden meanings. James Vega pursues an expressive study of faces and the human figure from which the feelings emerge, sometimes darker, often hidden, with whom we find ourselves living. He paints on recycled supports, experimenting with a language that connects the themes of life, death and 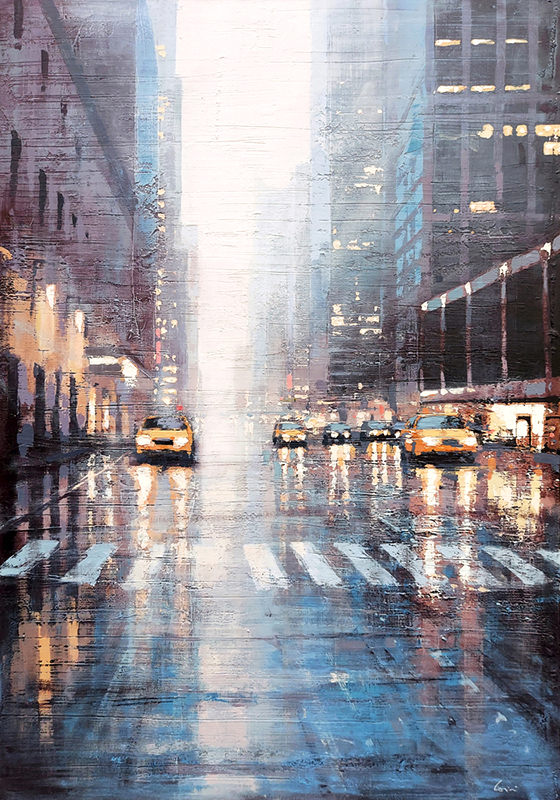 nature, giving the possibility of diving into a reflective nostalgia that seeks the intrinsic meaning of being and becoming a man. Leonardo Moretti‘s research focuses on the will to connect and at the same time distinguish relational attitudes concentrated on the outside and inside of himself, highlighting through the three colors black, red and blue – superficiality, passion and memory -, the relationships of appearance and truths with which human beings live in a conflict in his being social animal.Instead, in investigating what is the behavioral essence of the human being, the artists A-criticArt, Fulvio Leoncini, Andrea De Ranieri and Matteo Moni will lead us in this analysis.With A-criticArt, through a pop matrix, we approach an art where the pathological disorders of the personality are analyzed, whose technical choice is linked to the idea that the personality of a subject is made up of numerous variables and factors that interact and they intertwine like the pieces of a puzzle. Fulvio Leoncini in his works places us in front of the close link between madness and normality, where the marks left on the surface enclose healed wounds, but with surgical finesse. The pains accrued and accumulated are hidden to make room for an apparent serenity: what we see emerging from Leoncini’s works is a recognition of these wounds which, thus exorcised, bring light into the shadow.It is now known how each of us presents ourselves to others through shields, masks resulting from personal experiences and external influences. Andrea De Ranieri reflects on this theme by reversing its custom: it is only by wearing a mask that we can show ourselves to the world and be free to be ourselves. 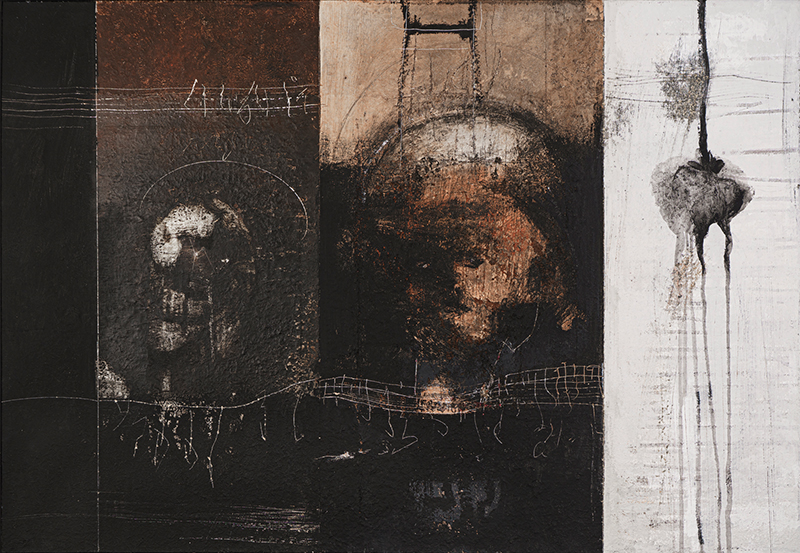 Matteo Moni takes us back to brutality, to a sometimes frightening cruelty. The feelings that arise from its oils are the fear of accepting that what we have in front of us is actually the manifestation of a repressed animal state of mind in us: primordial instincts, emotions out of control, in a time and space that do not belong to us but for which we feel an ancient and obscure familiarity.Marco Ferri and Antonio Cugnetto will offer a vision with more playful and ironic tones.Marco Ferri starts from the importance of the game and builds his works around it, through the stratification of various materials. Rhythmic modules that are full of childish innocence, mark the times of the stories narrated, in order to be able to savor their emotional aspects and rediscover a more intimate and welcoming feeling. And always on irony and game, Antonio Cugnetto composes his sculptural works giving life to waste materials, proposing ironic situations which do not distance themselves from the feelings and problems of modern man. The smile that arises spontaneously in front of his characters leads to a reflection made of a lightness that we often forget we can use when we find ourselves in difficult situations from which we don’t know how to get out.

In the internal room of the Gallery, however, a focus on Visual Poetry will be exhibited, in particular on the florentine Gruppo 70, to give voice and visualize those thoughts that often remain pending to receive their own form, with works by Lamberto Pignotti, Luciano Ori, Eugenio Miccini, Lucia Marcucci and Giuseppe Chiari.

You can find out more about which cookies we are using or switch them off in settings.

This website uses cookies so that we can provide you with the best user experience possible. Cookie information is stored in your browser and performs functions such as recognising you when you return to our website and helping our team to understand which sections of the website you find most interesting and useful.

Strictly Necessary Cookie should be enabled at all times so that we can save your preferences for cookie settings.

If you disable this cookie, we will not be able to save your preferences. This means that every time you visit this website you will need to enable or disable cookies again.

This website uses Google Analytics to collect anonymous information such as the number of visitors to the site, and the most popular pages.

Please enable Strictly Necessary Cookies first so that we can save your preferences!