On May 28, the lights of the La Fonderia Art Gallery, located at 42 red of the homonymous street, come back on. The honor of the restart that the gallery owner Niccolò Mannini now hopes has a definitive continuum has been ‘entrusted’ to Leopoldo Innocenti, a young Florentine artist born in 1994, trained in that ‘sacred’ institution that is the Academy of Fine Arts in Florence, 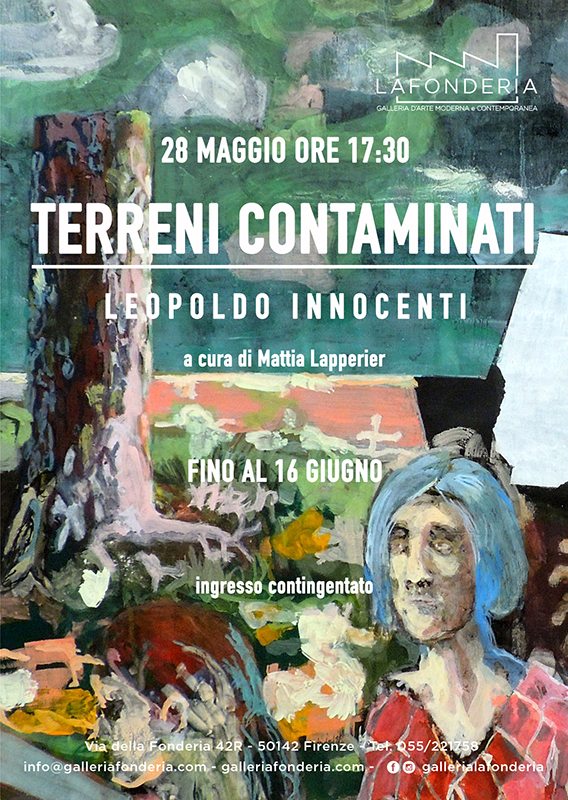 diploma in pictorial arts. “Terreni contaminati” as “Contaminated land”, this is the plurally evocative title chosen for the exhibition. A contamination, the one referred to, which first of all concerns the disorder, very orderly, with which the artist makes the invisible visible with paintings crowded with characters, visions and, ultimately, psychic migrations, and which becomes concrete in the the way in which the paper of the paintings is used, which is torn, shattered, finally glued and thus becomes the primary element of Innocenti’s research.

It is interesting, and singular, to note that the creative process implemented by Innocenti is not unlike the one with which he prepares, fertilizes and observes his garden, adjacent, in the middle of the city, to the studio where the ‘other’ works of he; after all, he likes to define himself as a ‘gardener of art’ and his works are prepared as the soil is prepared before sowing. And this is a further, evident contamination; which, without getting lost in the terrain of an alleged generative dichotomy, can be traced back to the unstoppable creative process once it is in place.

The overcoming of stereotyped prejudice towards formal and cultural constraints, this artist manages it with his own strength, in the awareness of not having to, and unwilling, postulates that condition his works. Thus he generates stories that draw on his personal reserve and forge of memories, thoughts, obsessions, dreams, suggestions, he assembles them, molds them with colors that are self-produced pigments, most of the times strongly diluted, and his narration is full of that. restlessness we encounter when we manage not to keep our innermost thinking at bay; this process, in Innocenti’s poetics, is achieved by abdicating the temptation to mediate between form and thought, spirituality and matter.

The exhibition will be curated by the art critic Mattia Lapperier, who, speaking of the paintings on display, spoke of ‘enigmatic mosaics of the unconscious’ and described them as follows:’ The artist’s interiority translates into a vast sample collection of recurring images, extrapolated from one’s own experience or emerging from the most hidden corners of the psyche. Threatening wolves, confused flights of pigeons, bizarre banana trees (the same ones he planted behind his house years ago), street vendors or complete strangers that emerge, freely associated with each other, from a composition articulated on several levels that has a lot in common with the structured complexity of an ecosystem ‘.

On the day of the inauguration, an installation will be presented, a circular work of considerable size, one meter and twenty in diameter by one and seventy in height. Then, in the following days, and, why not, in the years to come, the memory of having witnessed the baptism of a new Outsider Artist will remain for those who will be present. And, we hope, for a collective restart.

You can find out more about which cookies we are using or switch them off in settings.

This website uses cookies so that we can provide you with the best user experience possible. Cookie information is stored in your browser and performs functions such as recognising you when you return to our website and helping our team to understand which sections of the website you find most interesting and useful.

Strictly Necessary Cookie should be enabled at all times so that we can save your preferences for cookie settings.

If you disable this cookie, we will not be able to save your preferences. This means that every time you visit this website you will need to enable or disable cookies again.

This website uses Google Analytics to collect anonymous information such as the number of visitors to the site, and the most popular pages.

Please enable Strictly Necessary Cookies first so that we can save your preferences!